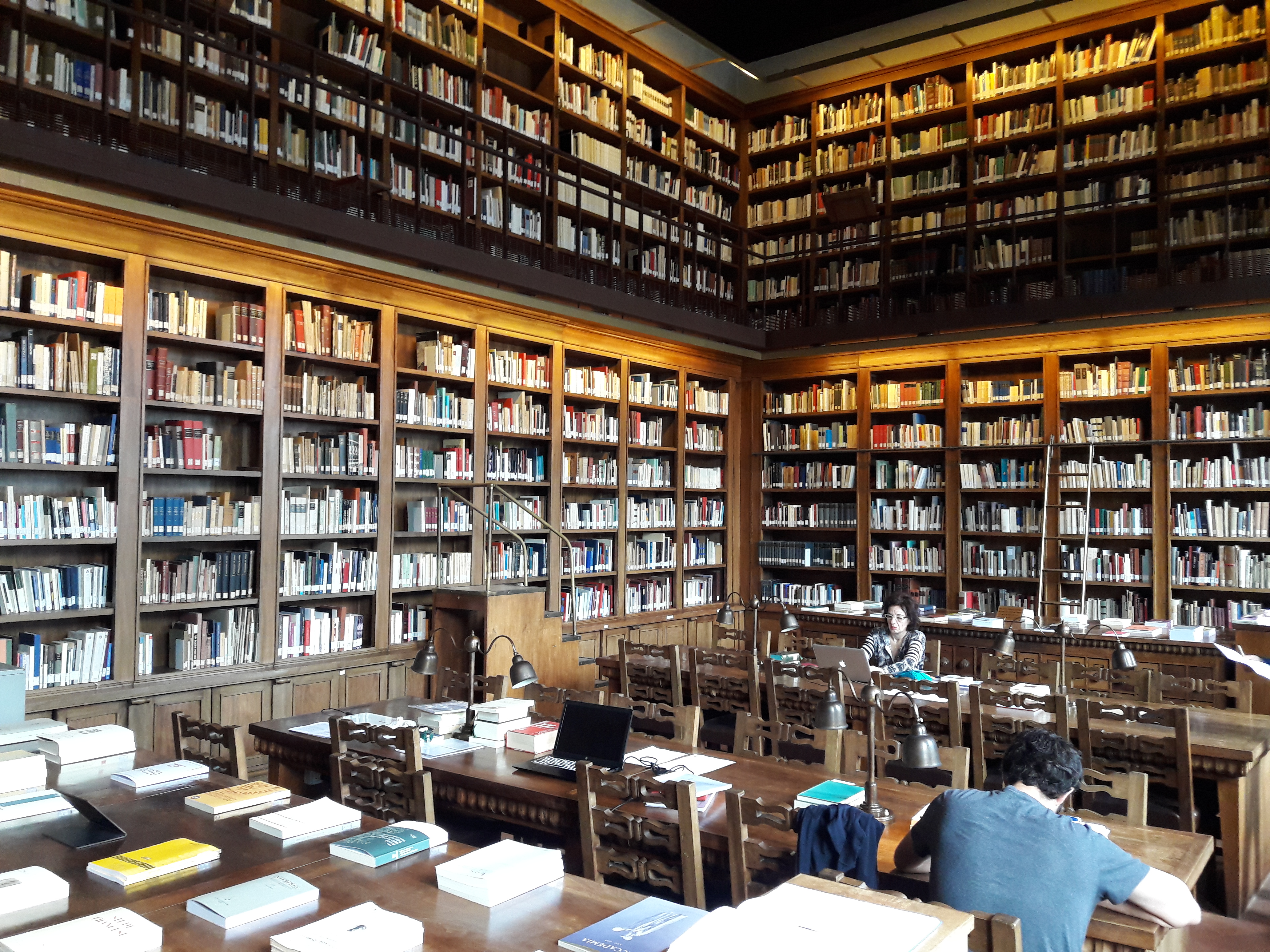 The Library, in constant expansion, consists of more than 80,000 volumes and 531 periodicals. This notable patrimony is available to readers on open stacks. Particularly important sections are: the Fondo Antico (divided into Early and Modern Topography, Travels, Art, Literature and History); Decorative Arts (divided into Tapestry, Weaponry, Ivory, Ceramics, Leatherwork, Drawings, Gardens, Etchings, Metalwork, Miniatures, Furniture, Numismatics, Goldwork, Clocks, Orientalia, Embroidery, Glazework, Seals, Textiles, Rugs, and Glasswork) and the section devoted to the history of theater which includes an important collection of studies regarding the role of theater in Humanism and the Renaissance.
Special collections include: «Giovanni Poggi» with its focus on Michelangelo; «Giovanni Poggi» consisting of 283 volumes devoted to architecture and city-planning; «Machiavelli-Serristori» with its 367 volumes concerning Machiavelli including 26 sixteenth-century editions of his own works; «Nello Tarchiani» containing 250 volumes on the Florentine history and art; «Angelica Frezza» with its 43 volumes on the history of art; and the «Fondo Rari» conssting of 163 rare editions.
Recently three new special collections have been acquired: «Luigi Califano» which includes the complete run of the journal «La Critica» directed by Benedetto Croce, the «Quaderni della Critica» and the most important works of the Neapolitan philosopher among which are found a notable number of first editions; «Alessandro Daneloni» consisting of some 600 volumes many regarding Greek and Latin authors and «Giuseppe Bezza», a unique collection entirely devoted to Renaissance and modern astrology.
In 2000 four new sections were created in the Library: «Consultazione Sussidi Biblioteca, Strumenti» consisting of some 50 volumes; the «Fondo Moderno Topografico» integrating the «Antico Topografico»; «Religioni» consisting of texts focused on the Reformation and Counter-Reformation and «Scritti in Onore».

The Istituto Library in 1997 became a partner of the IRIS Consortium of Florentine Area Art History and Humanities Libraries merging its patrimony into a shared bibliographic database. Its members are: the Berenson Library (Villa I Tatti – The Harvard University Center for Italian Renaissance Studies), the Library of the Dutch University Institute for Art History, the Libraries of the Gallerie degli Uffizi (the main Library, the Prints and Drawings Library and the 6 specialized libraires at Palazzo Pitti), the «Ugo Procacci Library» of the Opificio delle Pietre Dure, the Leonardiana Library at Vinci, the Library of the Museo Nazionale del Bargello and the Library of the Fondazione Rossana e Carlo Pedretti.

An archive consisting of some 78,000 photographs reproducing works of art from 1300 to 1700 is being classified and put online. The Library also includes 1332 microfilms and 950 prints and drawings. In addition the Istituto possesses an historical archive of its own activities, a resource particularly relevant for tracing the story of humanistic and Renaissance scholarship in the 20th and 21st centuries.